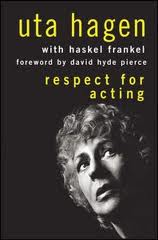 This activity can be easily modified, making it suitable for multitudinous ages regardless of the experience of the actors. For younger students, it may be as simple as helping them stay in character when they leave the stage, and helping them get into character before they enter the stage space. For intermediate students, it can aid in mental preparation and the idea that the character’s life is continuous and does not end because the actor stepped offstage. We Are Not Robots

Bring yourself into the activity! Tell the students, “for instance, when you leave the classroom, I do not power off at the end of the day. Sometimes before I come in to teach, good or bad things happen to me and may affect how I enter the classroom and even how I teach.” Give them an example of appropriate things that may happen to you– finding out someone backed into your car, versus having just gotten lunch with a great friend you have not seen in a while.

In the first one, you may appear more flustered and slightly annoyed, still teaching in a way that is professional, but not the most energetic and open. In the second one, you will be happier and perhaps ask the students how their days are going and joke with them a little bit before settling in for the lesson. Also tell them things happen to them too! Perhaps they got a good test grade and were rewarded sweets before class, or perhaps they got a poor grade and are restricted from playing outside and watching television… Of course, give examples that are age-range appropriate.

The Three Entrances activity consists of three parts (each entrance being a separate part), but it is fun and beneficial to start with one, working through it with each student so that they can find the details they need and understand how to apply them in the next two parts. Work through the exercise with each student by asking questions that encourage them to find interesting and appropriate choices and not by giving them directorial guidance or telling them what to do. Let them make discoveries through you questions.

Note: with this activity students start their entrance “off stage” in the “wing.” If they don’t understand the difference between being off stage in the wing and on stage be sure to explain the different spaces to them. They need to understand that as soon as they are on stage or in the acting area they are in a new room or environment and this affects how they behave. If you do not have a stage space, it can be helpful to use a piece of tape on the floor to designate the line between on and off stage or have them physically enter the room through a door.

Let students take turns, one at a time. You may either allow them to decide “from where they are coming,” or you may decide for them. Try to pick or encourage scenarios to which they may more easily relate. A student may choose, for example, that they are entering their home from outside. What follows are the steps that will help them understand the activity. Once they are able to do this once with your prompting, they should be able to begin applying the steps to the two other entrances.

Assign a tricky scenario for your actors like the one outlined above, but for the next one, maybe do something silly; Perhaps the student is entering a classroom, running late, on a test day, and they hear someone in the hall pass gas just before they enter. Have your students imagine what that sounds like, and if after a couple times they are still getting “too act-y” with it, have them close their eyes, relax, not think about it and enter– then use your own tongue or mouth and hands to make the sound. The student will likely genuinely laugh from either amusement or uncertainty, and that is a REAL reaction. Point that out.

Your goal in the Three Entrances acting exercise is to let your students see more than just the dialogue on the page– cting is listening, noticing, discovering, creating, feeling, reacting, and simply living in the moment. Life is full of quirks, and so is the theatre. This is a way to develop a “safe zone” for them to use their imagination and feel what they may not get to access openly. Have fun creating scenarios, adding to them, and making discoveries with your students!

Anna Smith is a graduate of Plymouth State University with a Theatre Arts degree concentrating in Acting & Dramatic Writing.  She is currently a teacher at the Bedford Youth Performing Company (BYPC) a non-profit 501c small business company.  At BYPC, she currently teaches acting classes, film makers classes, directs spring shows, directs summer camp shows, and participates actively in the “Circle of Giving” program.  Circle of Giving is the community outreach service provided by BYPC that helps bring theatre, music and dance to children (and elderly) who may not otherwise have the opportunity.