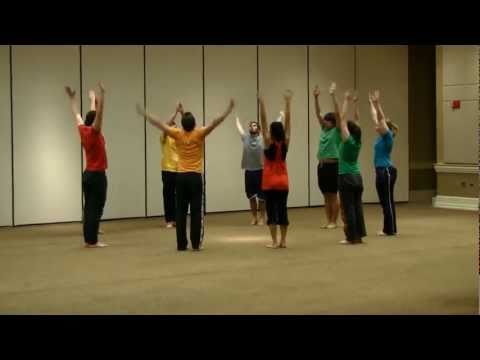 Viewpoints is active and works on various levels.

As a teacher in the classroom, I always become excited for the next time I teach an acting lesson, when a group of students tell me that they joined up together afterschool at a friend’s house and played one of Miss Anna’s “Theatre Games.” One of the ones (particularly my pre-teen and teenaged students loved) was Viewpoints.

When I teach this lesson, I share my own personal experiences with Viewpoints to better explain how it is done, why it is done, and the different elements that make up Viewpoints and why they are important. I tell them that when I was learning how they worked, it was to help inspire creative direction for a production in which I acted.

Practical Use of Viewpoints

In using Viewpoints, our director decided to pick out certain words, themes, or elements in the script that either struck her as being important or interesting or that she felt she wanted to discover further. She would split us into groups and give us all of these same elements.

As an example, things she may have picked included: the color purple, an argument, slanted, “this is unjust” said six times, unrequited love, and tree bark. We would then essentially create our own scenes (sometimes speaking was allowed, but often it was not). We would practice our scene until we were told to stop, and then we’d perform them. It was interesting to see which scenes were remarkably different even though all the groups were using the same words from the script. It was also revealing to note which ones were strikingly similar.

The Elements of Viewpoints

Next, we look at how to successfully use the Elements of Viewpoints. How you teach this technique could either make or break your entire lesson. If you drag on with a term for too long, read the definition straight from the book, or are not active and engaging, your students may dread Viewpoints. These sections, which are linked to below, will explain the elements, and how I try to actively explain them to my students.

Enough Talking, Let’s Do This!

There are additional Viewpoints that are strictly vocal, pertaining to pitch, vocal dynamics, and timbre, but I tend not to go into that area with my students for many reasons. They are young and their voices still have not developed, and I do not want to encourage any behavior that many damage their voices, form nodes, etc. I may encourage them to try different pitches, dynamics and timbres if they tend to fall into a monotone, but I have found that dedicating too much time in a lesson for that tends to lead to vocal manipulation rather than letting it come out organically. More often than not, if they can allow their bodies and respond naturally, the vocal aspect will come along too. Viewpoints are an excellent way to inspire creative motion as well as help an actor discover his/her “Mind-Body Connection.” In essence, how one emotes will affect one physically, and oftentimes being attune to certain parts of our body may help us reach or discover specific emotions.

Finally, I tend to erase the terms from the board, and use it to write down the elements for their composition. Sometimes it is from a script, and sometimes they have fun with random elements. In that case, it becomes more of a staged, semi-scripted improvisation rather than a composition. Either way, there are many benefits to this exercise. I would not recommend an actor relying on it solely, but rather opening up to it and using it as an additional acting tool. For instance, if an actor gets wrapped up in his or herself and becomes too internalized, it can be helpful to remind them to use their environment or architecture to free them up.

Some find this exercise to be not only physical and emotional, but even to a degree spiritual and aesthetic. It can help actors discover things about their characters they may not have realized before (rather than saying “my character would never…”) as well as discovering things about his or herself as a person. A huge goal of mine as a teacher is to allow my students to feel safe and confident in their acting and in themselves, and a large group activity like this one can be not only be most helpful, but also refreshing and freeing.