In Part 1, I wrote about a lesson that I taught a class of second graders. The lesson was on the passage of time. Children usually learn how to tell time in first grade, which is an obstacle in itself. Teaching the passage of time is a whole other feat since they have to fully understand the math behind counting time, counting by fives, fractions, and time terminology such as half-hour and quarter-hour. That day was only one scenario where I was struggling with teaching an abstract concept. On another day, I was having the most difficult time teaching fourth graders a lesson on measurement units. The students did not understand that a big number could indicate something small. They thought that if you were measuring something and the number had a lot of digits in it that the unit expressing the measurement was large. For example, they knew by rote or looking at a chart that 1,000 milligrams equals 1 gram, and that 1,000 grams equals 1 kilogram. They also knew that milligrams are the smallest mass unit and that kilograms are the largest. However, I lost nearly all of them when they had to solve a problem such as this:

“Maile’s doll has a mass of 300 grams. How many milligrams is the doll?”

Most of them did not understand that when you go from a larger unit to a smaller unit, you multiply and when you went from a smaller to a larger one, you divide. They assumed that since milligrams are a small unit, you should divide to get a small number. They could not grasp why a small unit would equal a big number. Once again, my theatre brain took over.

Turn It Into a Theatre Game

I read about this lesson in the Washington Post awhile back. Drama teacher Melissa Richardson and kindergarten teacher Carol Hunt at Westlawn Elementary School in Falls Church, VA created it. It can work for older students as well because many of them usually enjoy performing before an audience of their friends and classmates, while others any opportunity to get up from their desks! I had the students put their books away, and I assigned each student an animal or insect (centipedes, hippos, beetles, frogs, giraffes, bunnies, etc.). You can also have them think of their own animal or insect to make it more fun, but having a variety of sizes is important. I taped out a finish line on the floor (in the original lesson, the teachers created a waterhole, but you can add your own twist), and I told them they would be participating in a race.

The goal of the lesson is to show them that the largest animal took the least amount of steps to get to the finish line, and that the smallest animal had to take the greatest amount of steps. In other words, they would learn that a small number may represent a large unit, and, also, a large number may represent a small unit. Having them visually see this was helpful, and they had fun being actors! Why Not Simply Show Them?

I could have shown this concept on the board, but I elected not to do so. Why did I make the decision not to illustrate this concept on the board? I didn’t do so because I instantly knew when I gave them the first problem that I would likely be talking and writing on the board until I was blue in the face, and the longer I talked, the more bored they would get. I have learned that when students look bored, it usually means they already know the information, or they are completely lost.

When children are given the opportunity to act out a concept and are asked to do an activity that is hands on and dynamic, it is harder for them to lose focus. This is because whole self is involved. In this exercise, they are counting while using their imaginations. They may become a bit overenthusiastic or even verge on being wild, but with good classroom management, their energies can be contained and focused and the lesson becomes something that they learn through doing. When a child learns in this manner they are actively part of the solution, and that’s interesting and exciting to them. This lesson is perfect for visual, auditory, and hands-on learners, so why not engage your students in a lesson they’re going to enjoy and remember?

In my next two blogs, we’ll look at using improvisation as a teaching tool in the classroom and the idea that it’s okay to be wrong. 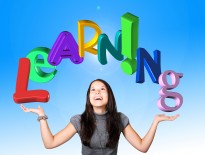 BWE Study Guides Using Improvisation to Teach: It Is Okay to be Wro… 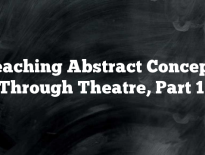