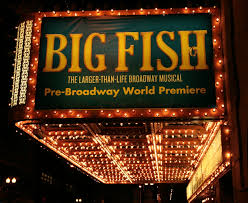 Fathers and Sons, Mothers and Daughters, Parents and Children

Based on the 1998 novel by Daniel Wallace, Big Fish The Musical is about a former traveling salesman (Edward Bloom) from the South who has a passion for storytelling. His son, Will, a journalist, has grown up listening to his father’s tall tales. Will is irritated and feels incapable of trusting him because his father has never told the honest truth about anything. He has always seen his father as an unreliable and absent oddball. His father did not have enough time for him as a child and was not always on top of the details of his own child’s life. Viewers can relate to this theme because often it is due to childhood relationship problems between father and son (or parent and child) that serves as the cause for future strained relationships. School-age children may relate to the musical for various reasons, whether it is because they feel that their parents are disconnected from their lives or perhaps they have a parent at home who enjoys telling them tall tales.

In Big Fish, Will ends up passing on his father’s stories to his own son, and because his father became his stories, he allowed his father to live forever. To begin discussing the musical with students ask them about stories that they know that have been passed down from father to son, or mother to daughter, or parent to child in their own families. It is beneficial to have them log these stories in a journal and have them write their feelings about the stories. Do they believe the stories to be true?

To quote Tim Burton, the director of the 2003 film version of Big Fish, “Big Fish is about what’s real and what’s fantastic, what’s true and what’s not true, what’s partially true, and how, in the end, it’s all true.” Edward creates elaborate myths about his past to hide himself, using storytelling as a means to avoid the truth. Will desires logic and honesty, but Edward is proud of who he is: a storyteller.

Since Will was a little boy, Edward has shared tall tales about catching a gigantic and uncatchable fish using his wedding ring as bait; how he became a successful sports player but found his town too small for his drive and setting off with a giant named Karl; how he worked for the circus; and how he helped a poet rob a bank in the hidden town of Spectre.

As Big Fish The Musical goes on, the stories told by Edward begin to blend with the stories lived by Edward, and Will takes it upon himself to come to terms with the truth. He finds the hidden town of Spectre, and learns from a woman that Edward actually saved the town from bankruptcy when he bought it at an auction and rebuilt it with financial help from many of his friends. Will discovers many other realities, including the fact that Karl is indeed taller than normal (although not literally a giant).

When Edward’s health deteriorates, Will ends up finishing the story his father has started. He brings together the images and characters of his father’s stories to merge reality and fantasy. Will gains understanding by letting go of his resentment and discovering that, in the end, all we have left—all we are—is our stories. His father’s stories were a gift. They may have been exaggerated truths, but to his father, they were realities.

Educators should discuss with students where they think the line is between real life and our interpretations of real life. Is it always meaningful to know the difference? It may be fun to have the class write their own tall tales. Have them brainstorm true experiences of their lives, choose one, and transform it into a tall tale by adding mythological types of images and characters to the storyline.

Quest Theme and Reconciliation Before Death

Will’s quest to seek out the truth in his father’s tall tales in order to mend their relationship before his father dies is a major theme in Big Fish The Musical. Edward ends up suffering a stroke and cannot tell his stories, so right before he dies, he asks Will to tell him the ending. It is at this point where the conflict is resolved in the musical. Will finally lets go of his anger and begins to understand his father for the first time and the reality concerning who his father was. Will realizes that his father is on his own quest to be a “big fish in a big pond,” so before his death they escape to the river where everyone in Edward’s “mythical” life appears to say goodbye to him. Will carries his father into the river where he is transformed into a “big fish”—symbolizing what he had always dreamed of being, and always had been.

Big Fish The Musical offers students, teachers, and parents numerous insights into family relationships, truth and illusion, and what is important in life. It is uplifting, bittersweet, and comical, reflecting the experiences of our own lives. There are many lessons to be learned from Big Fish The Musical.