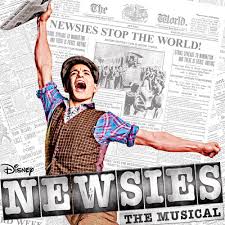 The musical NEWSIES is a dramatized, but overall accurate description of what life was like for children in the U.S. back in the mid-19th to early 20th centuries. The newspaper boys (aka the “newsies”) were the primary way that Americans got their papers, however, the newspaper boys were the most destitute group in society, and they were not well-liked by the general populace. The newsboys were employees of publishers (not the papers) and they would buy the papers from the publishers and surround people on the sidewalk trying to sell them. However, they could not sell back any unsold papers. Therefore, they might make little to no money in a day (thirty cents was typical pay per day), especially if the headline was not captivating enough.

The Spanish-American War increased newspaper sales, so in 1898 publishers raised the cost of papers to newsboys from fifty cents to sixty cents per one hundred papers. At first, the price increase did not affect the newsboys, but after the war, paper sales decreased. Most papers lowered their costs back down to fifty cents except for Joseph Pulitzer’s paper, The World, and William Randolph Hearst’s paper, The Journal.

In July 1899, the newboys’ strike began when a majority of them refused to deliver these two papers. The newsboys protested on the Brooklyn Bridge, stopping traffic and threatening paper cart drivers. They threw rocks at or beat up those who did sell the banned newspapers. Other newspapers covered the newsboys’ strike which attracted public support. After two years, the strike ended when, after the papers had lost a great amount of money, Hearst and Pulitzer made a deal with the newsboys. The deal was that they would keep the price of a bundle at sixty cents, but the publishers would buy back any unsold papers.

“Tell those with power safe in their tower we will not obey.”

One theme that the musical NEWSIES offers is that children do indeed have power. The musical takes place during a time when oppressive child labor practices were a standard part of American life, and the Newsboys’ strike of 1899 was a major step towards child labor rights. These kids fought aggressively in order to achieve their dream of simply receiving a decent day’s pay. It stimulated other strikes such as the Butte, Montana Newsboys’ strike of 1914, and a 1920’s strike in Kentucky. These young boys had the motivation and courage to rebel against corporate bosses. They knew that if they stood together, t

In the musical, Jack Kelley, a 17-year-old union leader, dreams of escaping New York to Santa Fe. He, along with the other newsboys, receives support from the other boroughs and they revolt. The inspiration provided by this scenario can benefit school children today, especially those who may endure rough or difficult situations in school, at home or in their community. This musical teaches kids that even in the most difficult situations, they should still go after their dreams. The musical still teaches kids that they are strong, and that no bully, classmate, parent, teacher, or boss, can make them feel inferior if they do not allow it.

“How about a crooked politician? That ain’t news no more.”

The set, which is a giant metal matrix rising from the ground upwards, reveals that NEWSIES is not solely about newsboys but about all workers. The newsboys are a part of the city, the workforce, and the metal fabric of the city. The musical raises questions concerning when Americans today should protest against deep-rooted power. Trade unions during the time of the “newsies” were trampled on by big-money people who ran our country, and this is still happening today. If these young boys who have endured so much suffering have the strength to stand up for their rights, we do, too.

Getting students to consider their rights and to debate the issues that NEWSIES contains is one way to create a new generation of educated and informed citizens who understand the basics of fair pay, justice and what it means to live in a society that embraces free enterprise and should reward hard work in a fair manner.