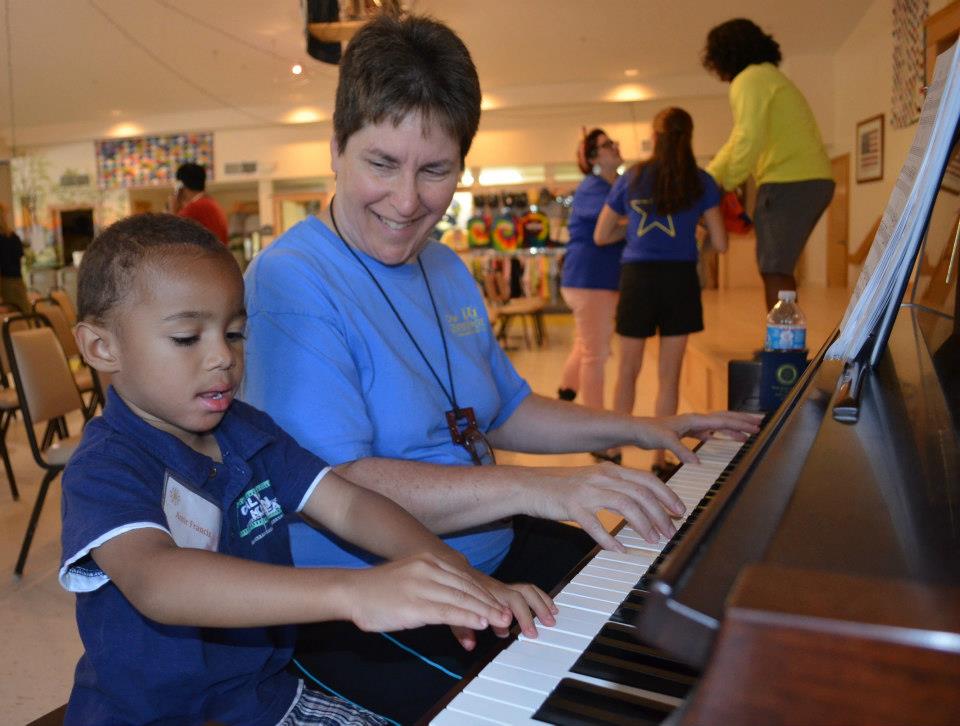 For several summers, I have had the privilege of counseling and teaching at Camp CenterStage, a performing arts summer camp where the staff’s goal is achieving excellence through the arts. I have worked at various terrific camps, but I find this one in particular to be especially inspirational. Summer camps in general are beneficial for kids because it provides them an opportunity to be physically (and mentally) active during the months when they are not in school. The one aspect of Camp CenterStage that I treasure is that the staff and campers maintain a non-competitive, judgment-free zone, and therefore, the children feel open to trying new activities, such as playing the guitar, singing a song in the talent show, or reciting a poem that they wrote at Sunday Inspiration. Even though not all of these kids have aspirations of becoming Broadway stars or professional artists, the positive life skills and leadership techniques they learn through the arts is vital. Each summer over the course of just a few weeks, I was able to witness a great deal of success and growth in confidence in the campers.

The Mission of Camp CenterStage

Camp CenterStage’s mission is to “encourage and maintain a safe and supportive camp environment of inclusive youth artists who value serving each other and communities through the use of their talents.” During the course of the two weeks the kids are at camp, part of their time is spent preparing performances and activities for outings to a camp for children with cancer as well as a senior home. These kids witness firsthand the effects of hard work and how their unique talents and leadership can serve the community.

Camp CenterStage takes place at the end of the summer right before children go back to school, which is ideal because the self-confidence that they gain carries over into the school year. They learn that just because they do not “get it right” the first time that’s okay, and they should keep on trying in order to improve. The idea is that when that child who learned to play a song on the piano at camp is studying a difficult math subject, he or she will remember to not give up.

Q & A with the Summer Camp Director

I was able to get in touch with Alexis Dascoulias, the director of Camp CenterStage, and ask her questions regarding the creation of and ideas behind Camp CenterStage. Alexis is a director, performer, teacher, mentor, and a huge innovator in her own community on Maui. Many of the counselors and staff at Camp CenterStage had Alexis as a teacher or director when they were youngsters themselves, and it is easy to see why they frequently return summer after summer to work at Camp CenterStage. Her responses will leave you feeling inspired to perhaps start your own arts program at the school you work at, or even to simply apply more theatre activities in the classroom.

Question: For starters, what inspired you to begin working with youth in a theatrical setting?

“The inspiration came from my first summer internship at a summer stock theater in Maine. Part of my internship was to help with the day camp program. After the first moment working with the youngsters – I was hooked! I loved the energy, the enthusiasm, the uncensored ability to explore and sing and enjoy. I worked in that same program for four summers and LOVED it! Then when I started college, I thought I wanted to be a performer, but kept being drawn back to working with youth. The reward my heart feels is far beyond any applause from performing.”

Question: Why do you feel like theatre is such a vital outlet for kids?

“Theater is instrumental for so many youngsters. It is a way for them to create and be physical and explore without the limitations of a score card or a judgement. Theater and any performing arts give young people freedom of expression. It allows them to work through situations and life challenges without damage. They can role play and look at other perspectives.”

Question: What inspired the creation of Camp CenterStage?

“Camp CenterStage was simply a way to take the best of all worlds – leadership skills and the arts. Young people have HUGE hearts and want to give and give and give ~ so CCS harnesses that ability and energy and desire by showing campers that they can use their artistic skills and abilities to provide services to the community. I have worked at many day and overnight camps that focused individually on leadership and on theater – but never one that combined both skills. They just go hand in hand.”

Question: Do you have any advice for teachers who don’t know where to begin when starting a theatre arts program in their school?

“Keep going, no matter what!!!!! Hold after school sessions and realize that you may have one session with 10 students and the next may have 30. Have lots of tricks in your bag of tricks so that if something doesn’t work, you can quickly change gears. Have fun! Be creative – but stay on task.”

Question: Please talk about any personal insight or memory of working with a particular child/children where you knew you made a huge impact in their life.

“One of the incredible positive experiences I’ve had regarding working in theater [with kids] are the people who stay in touch and want to reach out after years and years have gone by.”

How Can We Apply These Ideals to School and the Classroom?

For a lot of these kids, camp is like an escape from reality. Many of these children are teased at school, and it is only at camp where many of them feel brave enough to try something new, or even to speak in front of a group of people. This is the primary reason why using theatre in the classroom is beneficial practice for kids. It gives them the chance to stand up in front of a group of their peers and present something.

If you’re using the creative arts in your classroom, a list of rules for the class on how to be an accepting and encouraging “audience” may be useful in maintaining a non-judgmental environment. For example, classmates should always clap after a presentation is complete; they should refrain from chatting during a presentation as this may make the presenter feel insecure; and they should first give positive feedback followed by constructive criticism.

One thing I learned at Camp CenterStage is how important it is to listen. Just as adults want to be listened to, children have the same desire. Teachers can use theatrical activities to foster this skill in students. When kids are role playing, they need to listen and communicate with each other. Perhaps teachers can apply some improvisational role playing activities in the classroom. With improvisation, listening and verbal communication (along with cooperation) are extremely valuable because without these skills, there is not any “flow” to a scene. If you are teaching a social studies or history class, have the students role play a debate. Have them split into two sides, and encourage them to listen to the opposing side 100% before they state their own views and defenses.

Most teachers are already aware of these activities and benefits, but they are often not applied in the classroom, and they need to be. As Alexis said, children have big hearts. They mean well, but often do not know how to communicate in a positive way. This is why feelings are accidentally hurt, resulting in fights and arguments, consequently causing a child’s self-esteem to plummet. The earlier teachers begin instilling these types of theatrical activities in the classroom, the sooner children will begin to feel more secure and confident with their ideas. The positive experiences and lessons learned can serve as an important foundation, helping to create students and young adults who are willing to try, fail and ultimately succeed in the years to come. Those who are ready to lead, collaborate and communicate.