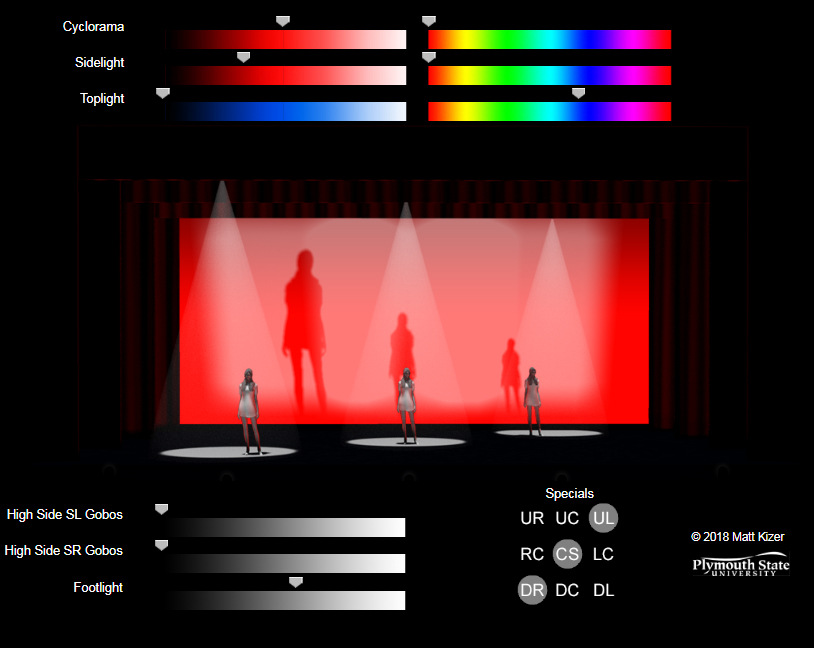 In 2002, I created a set of browser-based light labs. These demonstrated the principals of lighting design, as well as creating an accessible place where people can experiment with light.

There are some pros and cons to a browser-based lab. The pros are easy: You do not need to buy software. You can use the lab on almost any device.   This made these tools a great go-tool resource for many beginning designers and teachers.   They are listed on this site, and still receive a lot of traffic.

The cons:  “Browser-based” means that the lab relies on what your browser is able to do.  These include Chrome, Firefox, Safari, Edge, and others.   Internet browsers are not designed to render three-dimensional scenes or calculate complicate mixings of color and shadow.    The lab  that I created in 2002 was based entirely on pre-rendered images.  You set a combination of factors, and the browser then displays a pre-rendered image based on your settings.   This meant that there are – literally – thousands of pre-rendered images stored, ready to be displayed, depending on what combination of buttons and switches are clicked.

I made that old light lab by creating a sequence in a 3D-rendering program.  Like a clock, it methodically stepped through every combination of settings that the lab would permit, and rendered the appropriate image.   The browser does one simple thing:  It compiles all of the settings of the switches and buttons into a string of information, and then displays the image (an image that already exists) that corresponds to that string of information.

I created this originally in support of the American College Dance Festival (now called the American College Dance Association).   Our university was hosting about seventy dance-performances in the span of about three days.  We had to tech and present each of those, with only about ten minutes to tech each performance.   Each company was able to build their cues online, and submit them to us ahead of time.   We had every cue written before the dance company and their choreographer arrived.   We spent the ten minutes of tech discussing when to call the cues, and making minor adjustments in the looks, which made those ten minutes very well-spent time.

It does a nice job of showing the basic principals of how light behaves on a stage.   Some of my lighting design students experiment with it a little to explore ideas away from other resources.  However, it is a bit of a blunt-instrument.   The colors and levels are all on-or-off.  It’s kind of flashy, but it lacks the potential for subtlety.

Over the years, I have continued to tinker with HTML and javascript on a regular basis.  I have seen the capacity of those tools evolve year-by-year.   I have had a mind for a while to update my lightlabs based on what I knew web-browsers were capable of doing.    However, I never quite had the right combination of need and timing to undertake the task

This coming year, we will be once again hosting the conference for the American College Dance Association at Plymouth State University.   Amanda Whitworth, the Director of Dance, asked me if I would once-again create a virtual lab online, serving the same function as in 2002.      This past week there was a reason to update these tools.     I thought I would put it on my radar for this summer.   Instead, as so often happens, I could not sleep one night because I kept writing code in my head.   So I stayed up late one night, and made a new page.

Unlike the 2002 version, this one does not use pre-rendered images,  Instead, it has a stack of semi-transparent images that are manipulated by the code.   The control-settings adjust the color and opacity of about 20 different images that are stacked, back-to-front, all in one place.

The new lightlab allows for much subtler manipulation of colors and light levels.   I have added footlights to the mix as well.   The version that will be on the page for the American College Dance Association will include buttons for recording and reviewing cues.   However, I have put a simplified version online that is free for all to explore.