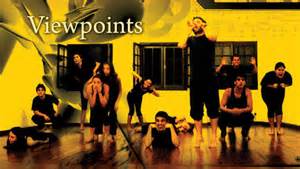 In college, I found that the strongest productions I took part in were the ones that started with exercises in architecture, special awareness, tempo, and topography, key elements to Anne Bogart’s philosophy of Viewpoint Composition. The reason why I enjoyed Viewpoints in college was because there was an emphasis on collaboration.

As a young substitute in the public school world where I was constantly being asked how I wanted students to complete tasks by those students, I wanted to be able to turn the question around and ask them how they would want to complete those tasks. So when I was asked to direct the high school’s production of Almost, Maine, I recognized a need for ensemble exercises that would force the students to listen to themselves, their bodies, and their peers.

“These postmodern pioneers forged the territory upon which we now stand. They rejected the insistence by the modern dance world upon social messages and virtuosic technique, and replaced it with internal decisions, structures, rules or problems. What made the final dance was the context of the dance. Whatever movement occurred while working on these problems became the art. This philosophy lies at the heart of both Viewpoints and Composition.” ( The Viewpoints Book: A Practical Guide to Viewpoints and Composition)

The theatre created by the exercises becomes the movement replicated within the actual work and is based on a mutual discovery. This type of theatrical process stimulates a high leveal of communication during what is an intense period of creation. I was unsure of how the high school students would react to the Viewpoints exercises, but then I remembered how when in college non-dancers reacted to modern dance classes, something that was as foreign to them as Viewpoints was to my students, I figured my high school students wouldn’t try to be too affected in their responses. I also realized that to be successful I needed to eliminate their chatty nature! So in the exercises I focused on the following operative elements – kinetic response, shape, architecture, repetition, topography, tempo, and gesture.

After taking them through some exercises outlined in the book, we moved to the most important step – composition! Once they understood the definitions of the operative elements on which we were focusing, I divided them into groups composed of four or five students. I gave them the task to create short skits using certain elements, voiced words, and phrases, and vocabulary from the Viewpoints book. We did as many skits as there were scenes in Almost, Maine and framed the basic plots of each scene with elements chosen by me. For example at the end of Act I, I required that their skits each have a bag of luggage, an important question, snow, a long hug, architecture, and a slow tempo. Also, in creating the composition, they were not allowed to speak to each other out loud, but they could write short notes if necessary. After they worked on a piece for about five minutes, I had each group perform for the others. We then discussed the basic plot of what we saw.

For the most part, the students were not allowed to use dialogue in their compositions unless specifically directed, so the results were a little abstract. Interestingly, their favorite part of my chosen elements ended up being spoken words in repetition or song.

Why I Would Do It Again

I learned from this exercise that the high school students actually worked better when they weren’t allowed to speak to one another during the blocking process. The students were also able to take turns being leaders on their own. They did well in later blocking rehearsals when I asked them to recall Viewpoint vocabulary words.

Mentioning “spacial awareness” with kinetic response was the best way to help them refer to their relationships with other characters and to gauge overall body awareness onstage. Despite all the heavy jargon related to the activity, it was really fun to watch them work together creatively and become better listening actors. That, above all, made Viewpoints a success in working with high