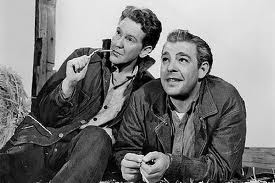 The characters in Of Mice and Men are powerless due to various circumstances. For instance, Lennie, although he is employed as a ranch hand due to his physical strength, he is powerless because of his mental disability. George, Candy, and Crooks (although they possess more intellectual power than Lennie) suffer economic powerlessness. Despite the fact that they are optimistic about the future and are motivated, the Depression does not allow them to make enough money. In the end, Lennie, who makes George’s dream of owning his own homestead worthwhile, ironically becomes an obstacle to making that dream a reality! George is essentially a parent to Lennie, and when Lennie causes all the trouble on the ranch, he is faced with a difficult choice. Although now he will not bear the responsibility of supervising Lennie anymore, he lost a valuable part of his dream. Without Lennie, his true companion, his dream is no longer worthwhile and he feels even more powerless. Teachers should discuss with their students the theme of oppression and abuse. Readers can see this theme clearly conveyed by Curley and his wife. Curley uses his violent behavior and leadership position to take advantage of and control the ranch workers. He is consistently chiding the ranch workers, threatening them for minor incidents, and accusing them of toying with his wife. As for Curley’s wife, she is not physically but verbally manipulating. To win attention from the ranch workers, she uses her sex appeal to manipulate them through flirting. Both of them symbolize immorality in that both abuse the ranch hands in different ways.

Steinbeck emphasizes that oppression and abuse does not come from only the strong and powerful, but it is born in weakness. For instance, Crooks gains a feeling of power when he almost makes Lennie cry for fear George was not going to return home. This arises from his state of isolation and loneliness. Curley’s wife is at her strongest when she threatens to have Crooks killed if he complains about her to Boss. This comes from the lack of affection she receives from her husband and her bitterness at lost fame. Lennie has to be strictly supervised by George because he might accidentally hurt (or kill) someone. His weakness is that he is not aware of his own strength. For instance, he accidentally kills his puppy. When Curley’s wife allows him to stroke her hair, she upsets Lennie when she yells at him to stop “mussing” it. All Lennie attempts to do is cease her yelling, but he ends up killing her by unintentionally breaking her neck. George is defeated by his own oppression when he shoots Lennie. His weakness is that he depends on Lennie to make his American Dream worthwhile. He shoots Lennie to protect him, but now, his dream also vanishes with Lennie’s death.

It should be evident to students that Lennie is the central character in the story Of Mice and Men. The entire plot revolves around a man with a mental disability and inability to control his anger fitting into society. Lennie drives the action of this story and the other characters are developed primarily in terms of their relationships to him. For example, due to his intellectual weakness, he needs George to protect him. George wants his companionship, but Lennie continues to cause trouble wherever they go, and this time around, he has gone too far. Curley’s wife’s main function in the story is to be an obstacle and a danger to Lennie. Lennie’s death results from him murdering her. George’s turning point results from Lennie dying. All of the conflict in this story revolves around Lennie.

In Part 4, I will provide discussion material about the animal imagery that is used in Of Mice and Men, as well as some fun facts about this masterpiece.