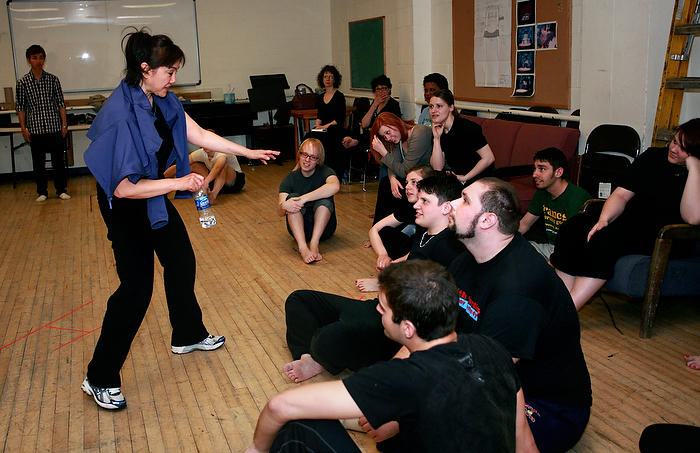 Sometimes actors reach a point in their endeavors when they may feel as if they wasted four years in college studying their dream for nothing. “I should have done what my dad told me and studied science,” actors may think to themselves. “I am not even working in the theatre. I make my living waiting tables!” I am here to tell you that it was not a waste. In fact, I commend actors for following their passions, and I encourage teachers to inspire students to follow their dreams. Dreams can become reality, and I firmly believe that becoming skilled in theatre can open all kinds of doors to a variety of opportunities for people. Ultimately, whether or not an aspiring actor ends up on Broadway or becomes the president of a department store, an education in the theatre is never a waste. There are valuable life skills learned and practiced in the world of theatre, and I am going to provide examples of some that I personally have developed myself through my own theatrical education (and experiences), as well as some that I have observed in colleagues. It is vital for actors to learn how to maintain focus and practice the skill of thinking quickly to solve problems because in live theatre, anything can happen. Actors may forget lines, the set may fall or break, or lights may unexpectedly go out! Actors learn how to cover in these situations while remaining calm and staying in character. In the corporate world, clients, guests, co-workers, and technology can cause unexpected problems from time to time. For instance, a customer service representative may have to deal with a heated client during the busiest time of their shift, or a server in a restaurant may have to work around a power outage that causes the POS systems to shut down. I can state from experience in both of these fields that studying theatre in college for four years also trained me for work in the service industry. Working on a theatrical production is similar to working for a business. In theatre, various teams of people (costumers, set designers, set builders, and lighting designers, etc.) all make up one big team working together towards the same goal. There may be disagreements along the way, but remembering that everyone has the production’s best interests at heart can help people communicate more effectively. It is the same in the business world. For example, in a department store, the sales associate in shoes ultimately has the same goals as the visual merchandisers. They want customers to have a pleasurable shopping experience so that they continue to shop in the store. In a restaurant, where competition among servers can cause people to be caddy, servers are also ultimately working towards the same goal as each other. I had a manager once say, “A fellow server’s guest could be your guest tomorrow.” She said this so that everyone in the restaurant would help each other out in order to keep the restaurant’s service at its best. I learned the importance of teamwork early on in college by being involved in so many musicals, and also working on various aspects of a production.

Less Can Be More Theatre has helped me appreciate the importance of creativity and imagination. Production teams have to learn and adjust to doing more with less. In college acting classes, we presented scenes in a studio: there was not a stage or lights and we did not wear makeup or costumes. We typically did not have a set or props (if we did, we used boxes and classroom chairs). Some of the most breath-taking and inspiring scenes I have ever watched took place in that acting studio. I have worked on shows where we performed on a teeny-tiny stage, but our choreography was top-notch. I have worked on children’s

productions where we did not have a tech crew as our set was transportable and so simple. These sets, however, fascinated so many kids regardless of how basic they were. I have directed musicals that were performed in both auditoriums as well as gymnasiums and “cafetoriums.” Some of our highest-quality productions, however, were in the less spectacular venues. I realized that a musical does not require a Broadway venue to be a success. All that is required is talent and creativity. In customer service, I have also discovered that you do not need the latest technology or all the “frills” to be a successful company. For instance, my favorite Mexican restaurant that I have ever dined at was not the colorful, hopping restaurant with all of the decorations, but a little hole-in-the-wall eatery with zero ornamentation. Why? The service was fast and hospitable, and the food was delicious and prepared well. In order to have a truly successful business, you simply need competent employees doing their best to serve a customer with a friendly attitude.

Actors are Qualified for Life

Studying theatre in college has resulted in me being marketable for many different types of careers, from customer service to sales to infomercials. Actors, especially when they are first starting out, need to find work in between gigs. As a result of my theatre experience and education, I have often been interviewed on the spot for various jobs because employers know that actors and performers possess a variety of skills that they can bring to the table, such as charismatic personalities (in both good times and bad), confidence, and stamina.

In Part 2, I will discuss more about how the work an actor does in preparation for a production makes them excellent candidates for numerous “real-world” careers.