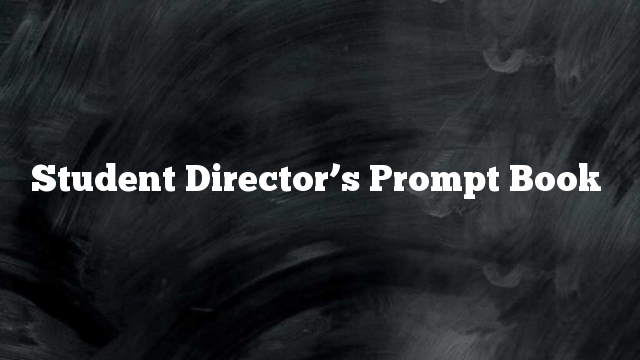 Student directors need to document their process, including showing clearly the reasons for the directorial choices they have made.  Here’s is an outline for a Student Director’s Book. Along with the materials outlined below, it would also include:

The book would be in a three-ring, hardcover binder.

This page would contain the following:

Here’s an example of what a schedule would include.

As this is, due to time, more of a presentation than a performance, we have opted to mime many of the props.  If we were to perform this piece, I would have nothing mimed – all the props would be furnished.  To indicate this, props listed in Plain Text are those that we are using in our “performance,” while those listed in Italics are those that would be included in the actual performance of this piece. Below is the prop list for a play entitled Simply Selma.

coat on rack, money in coat pocket; fixings for a sandwich

This page includes photos, artwork, sketches and other visual representations of the play’s themes, characters, emotions, tone, and atmosphere. By utilizing images a director may be able to better define what the play is about, refine his/her vision of the script and communicate ideas to actors and others in a clear, concise manner. (Note: this section may be more than one page long.)

Below are the basic elements of script analysis that every director needs to use.

–       Must have kitchen table and chairs, sink, stove, refrigerator, with two doors that lead to front porch and back bedrooms, television

Selma has returned home to care for her mother, after completing only a year of schooling (most likely a tech school rather than a college).  She has not dated in over a year, though she doesn’t at first think it’s been that long.  Each of her previous relationships have ended badly (though not in the cutting we’re doing) and she has been left questioning the value of such relationships.  She is totally devoted to her mother and her mother’s welfare.

Mama has a physical condition that keeps her from working and caring for herself.  She has been recently widowed and joined by her dutiful daughter.  She tries hard not to interfere with Selma’s work but feels very comfortable trying to manipulate her love life, which she sees as a way of helping.  She wishes that Selma could find as nice a man as her deceased husband was (indicated in portion that was cut).  She is obviously lonely and deeply desires company, from Selma cutting work to Michael staying for long visits.

Michael has been to the Tech and has developed his own business, which he takes great pride in.  He is one of the guys, but shies away from the more seemly activities of his male friends.  He admires Selma for her dedication to her mother, but at the same time, avoids visiting his own parents (hasn’t seen them in a couple months).  He is easily impressed by images (like Selma’s being in the “entertainment industry”) but remains very old-fashioned in his values (despite the fact that he doesn’t practice a faith).

–       her devotion shows itself in physical actions (both affections and deeds)

–       not stubborn but very independent by necessity

–       struggles with her job versus her goals

–       struggles to be accepted by others (and even herself a bit)

–       however, she does struggle with the choices she’s been forced to make which is clear shown in the final scene when she cries for the loss she feels (not just Michael, but her need to strip in ordre to survive)

–       desires to finish school and have a better lifestyle

–       clearly understands the implications of her current job in society

–       dutifully cares for her mother and understands Mama’s needs

–       has loving memory of deceased father

–       her devotion shows itself in physical affection

–       struggles with the direction her daughter’s life has taken

–       determined to help her daughter, despite Selma’s objections

–       has definite desires but is unable to fulfill them

–       traditional beliefs, from prayer to modesty

–       helpful in a somewhat manipulative way

–       clearly understands the circumstances of her life

–       desires so much more than life offers for her daughter

–       loves her daughter beyond all else, unconditionally

–       likes Michael so long as he treats her daughter well

–       struggles with finding someone to share his life with

–       struggles the impression he gives others

–       not incredibly strong, especially compared to the women

–       easily swayed by all the others in his life, except his parents

–       seems to believe in people, but this proves false

–       ends up having extremely traditional values to a fault

–       not exactly manipulative, but he does let Mama set him up with Selma

–       great looking, a perfect gentleman in an old-fashioned way

–       desires a traditional wife but not much more

Final Thoughts on The Book

The director’s prompt book is a good way for students to formalize their ideas about a play, develop a plan of action and create a document of the entire process.