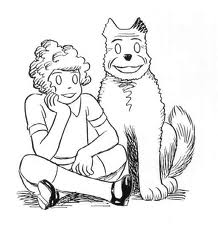 A Bit of History

ANNIE is a Broadway musical based upon the newspaper strip Little Orphan Annie, created by Harold Gray in 1924. The plot of the comic strip follows the adventures of Annie (who wanders throughout a world full of immorality), her dog Sandy, and her supporter Oliver “Daddy” Warbucks. The comic appealed to adults with political commentary directed towards organized labor, the New Deal, communism, and unethical businessmen. When the stock market crash of 1929 occurred, Gray was insignificantly affected as the strip was more admired than ever and provided him with a steady income. It did, however, inspire Gray to lecture in the strip about hard work and initiative while he survived off his substantial revenue. As a result, Gray was loathed by many deprived Americans.

Franklin Delano Roosevelt was elected President in November 1932 and he proposed his New Deal, which many people (including Gray) considered to be government interference in private business (Gray even exterminated Warbucks in 1945 because he did not think that Warbucks could survive in the world with FDR. Gray brought Warbucks back to life after FDR passed away). As a result, Annie’s life became obscured by criminals along with New Deal altruists and officials. Gray had also begun to delve into the shadier characteristics of human nature (greed and deceit), and the gap between rich and poor was a primary theme.

Now, eighty-nine years later, the musical (with music by Charles Strouse, lyrics by Martin Charnin, and book by Thomas Meehan) is set in the time of the Great Depression in New York City, when Gray originally wrote the strip, but it drifts away from political views. Although the two stories differ quite a bit, the character of Annie has always been sympathetic and optimistic. In both the comic strip and the book of the musical, she can stand up to bullies and possesses a strong and natural sense of justice. Although the musical is not centered on politics and focuses more on Annie’s search for her parents, the supporting characters and the ensemble still portray the attitude of the period that Gray illustrated in his comic strip. It is easy to be distracted by the spectacle of the musical (after all, kids are huge fans of this production), so below I have presented a more in-depth vision of the show’s themes for educators to discuss with their students, whether it be in a history, film, or theatre class.

Annie has a burning desire to escape the orphanage and search for her parents. When she finally does, she ends up in Hooverville, a slummy town constructed by people devastated by the stock market crash. This theme of civilians finding themselves suddenly at rock bottom is one with which most generations can identify. Consider today: many people are still suffering from a poor economy. In the song “We’d Like to Thank You Herbert Hoover”, the audience can sense a great deal of anger and restlessness in these suffering characters. It is quite easy to understand why these people (in real-life) would detest Harold Gray for preaching to them about taking initiative and working hard after they have fallen to the bottom. It is also simple to see how this sudden loss of hope can bring out the darker sides of human beings. The wealthy are afraid of losing all they have, so they refuse to give. The poor are hungry so they steal. Everybody continues to want more for themselves.

In the musical, the characters of Rooster and Lily, who kidnap Annie so they can obtain the cash award, are not at the bottom, but they certainly are not at the top. Just as Gray explored the selfish and devious sides of human nature in his comic, Meehan’s book uses Rooster and Lily to symbolize this. We can also see the gap between the rich and the poor that Gray exemplified in his comic through the contrast between Oliver Warbucks (a billionaire) and the rest of the cast (the orphans, Miss Hannigan, and the Hooverville residents).

Having and holding hope and optimism through life’s journey, no matter what the circumstances, is what ANNIE is all about, and what the character of Annie symbolizes. Look at Warbucks’ life before Annie came along: he was a grumpy and bad-tempered man, and after she arrives eventually he’s filled with joy. Also, the popular theme song of the musical, “Tomorrow”, is sung by Annie numerous times in the musical for a reason. It is what the musical is about. These lyrics even motivate the President to get moving on saving the economy. Clearly, this spunky red-head represents a contagious amount of hope for the future if she has the ability to inspire the President of the United States.

She also possesses an enormous amount of optimism while she waits for her parents. Even when she was in the brutal orphanage, Annie was exceptionally hopeful. Despite the fact she was raised in a home for unwanted girls, she possesses important attributes, including common sense and the ability to determine right from wrong. In this way she symbolizes justice. Annie’s optimistic spirit evidently pays off for her in the long run because the destitution she experienced at the beginning disappears and Annie does not look back.

So what is the message of the musical? Life is difficult, but “the sun will come out tomorrow” to an improved life for those who remain optimistic. This is a moral we are reminded of every day, but often times life’s occurrences (job loss, tragedies, natural disasters, etc.) make it exceedingly difficult to be hopeful. This is why ANNIE is such a timeless musical for all ages, and even without the political themes, it is still a meaningful musical to see. As we all know, the sun did come out eventually back in the 1930s and ‘40s in America, leading to a new prosperous era in the late ‘40s and early ‘50s.