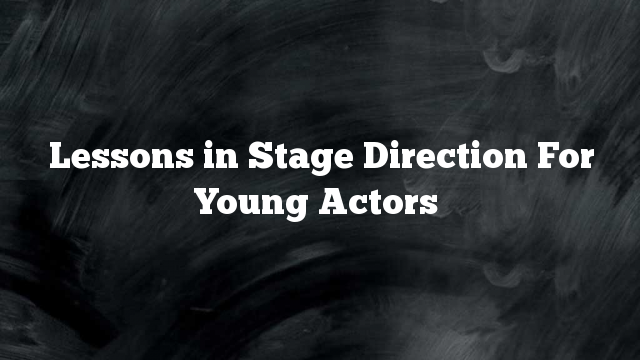 When I started teaching acting classes, I knew I’d need to be able to start each class with some basic knowledge. The hard part about that is that I have some students who come back to take the same acting classes again and they’ve already learned the basic jargon. I have to find a way to make learning stage directions fun, active, and “unboring” for kids who have already learned them before.

In teaching acting classes, students like being read to when they can be a part of the story. I like to write a short story specifically for the students I have on my first day of class that will teach them stage directions subliminally. The kids act out everything I say in real time so they don’t know the outcome until I’m finished reading. That gives license for the writer to add some humorous elements so they laugh at themselves while they act it out! Most recently, I wrote a story for five students in my new class. It was a story about a rude opera singer whose dog walkers don’t return her tiny French poodle in time. The French poodle escapes from the dog walkers and meets up with a street performer who dreams of being an opera star. The dog walkers and street performer meet up, find the French poodle together, and bring it back to the rude opera star who ultimately learns that they are all talented and kindly invites them to perform on her stage with her. There’s a lot of running around, silliness, and loud noises mixed in with the plot.

I write a silly circus of a skit that emphasizes entrances and exits as well as physical actions by the characters. Besides that, every time the character names are said in the story, the actors have to stop, pose, and make a noise like that character before the story can continue. The opera singer hits high notes with big arm gestures, the street performer juggles and sings, and the dog walkers are pulled around by invisible, barking entities.

If you choose to use this method, there are possible snags in the plan. The big snag could be that you’ve written 5 characters for the skit but only three kids show up for class… or more than 5 students show up for the class. In this case, write in some groups of characters that can be reduced or put together to accommodate different sized classes. In my story, I made one of the students the French poodle though that character could have been imaginary.

In closing, make it fun, make it silly, and don’t be afraid to be enthusiastic while you read. They won’t even realize that they’re learning how to enter and exit on the correct sides of the stage!

Do you have a fun method in teaching stage directions? Let us know on Twitter!