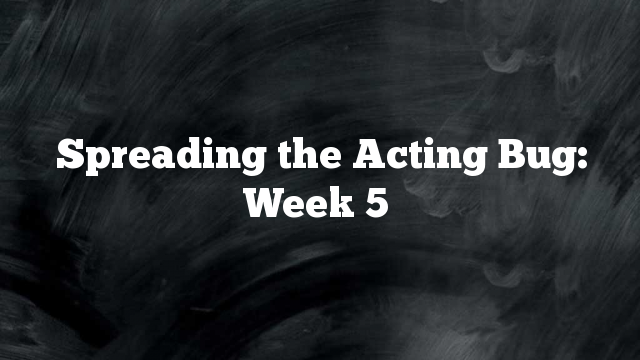 Finding a common ground when you’re working with kids not familiar with the world of theatre can be challenging. You can belt out “Defying Gravity” at them all you want but they probably won’t understand. Though I don’t know why you’d want to belt out “Defying Gravity” in a children’s acting class… *Shrugs* This week, I took on the act of teaching a dance combo and I was so thankful for the overlap that is musical theatre and the wonderful world of Walt Disney.

In my class, I had two girls aged 7 and 8, and a 10 year old boy. After the usual schedule of warm-ups, the special question of the week (see the posting from week one if you are unfamiliar), and a focus activity that pushed the kids to create a human machine with beeping sounds and robot movements, we were ready for the combo! Two of the three kids knew the song “Be A Man” from Disney’s Mulan, one of which could recite every word. We began in the middle of the song and went all the way to the end. It was a one minute dance combination that took me about 30 minutes to teach. I incorporated some dance step classics like pivot turns, grapevine, jazz squares, and chaines. Amongst all the learning, there were some cool punches, kicks, and steps I had learned in my Karate forms as a kid. I added in some freestyle poses as well to promote creativity.

By the end of the class, I wasn’t quite able to let them do the combination on their own. I did what I could to try to stand in the corner and give them hints to the next steps. However, once my movements decreased in commitment, so did theirs.

Do you teach a movement class to little ones? What tricks do you have for helping them memorize their steps? Let us know on Twitter!