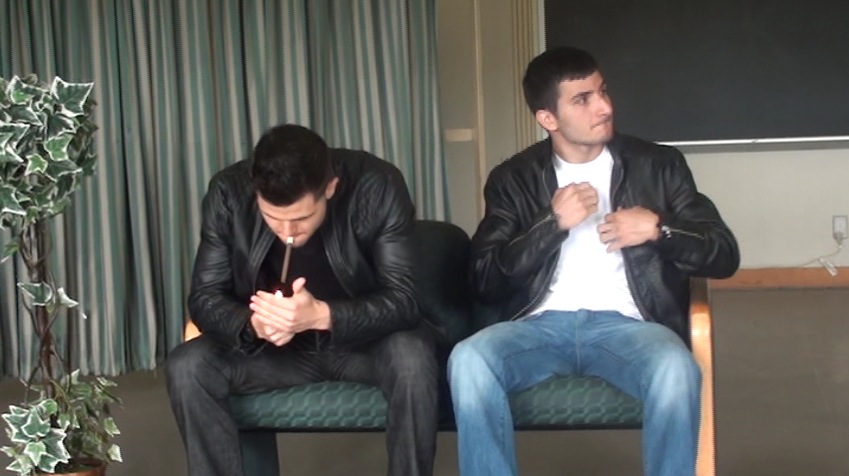 When teaching acting to high school and college students one of the things you are trying to get them to do is to make their performance real in terms of it being genuine and believable. This is not an easy thing to do as too often those who are training to be actors are more interested in performing, being funny, and creating a big moment on stage. One way to help actors understand and discover the power of staying in the moment and making their acting real is through the Silent Encounter. Here’s how it works.

The silent acting encounter involves two or three actors with each playing a character that they have been given by the acting teacher or the class. Each actor in a scene is given three basic character elements which are described by answering the following questions:

The “who am I” can be described by a job, relationship, or types. You might be a mechanic, banker, football player, etc. The “what just happened” question is answered by giving the character a situation that just occurred such as “I lost my wallet,” “my spouse just died,” or “I was told I have a week to live.” The “what do I want” is what we call the characters objective and it has to be expressed in an active manner. Examples include, “I want to feel safe,” “I want to die,” “I want to feel secure.”

To give actors a specific character you would answer the three questions, putting the elements on an index card. Thus a card might read, “Cab driver, found a million dollars, to hide it.” Another card might read, “Police officer, lost my partner in a shootout, to be comforted.” You need 20 to 30 of these for a class.

Two actors blindly pick index cards that contain their characters. They go off to opposite sides of the room, read their cards, and prep their characters quickly without discussing any aspect of their character with their scene partner. Usually a fairly neutral set such as a park bench works well for silent encounters.

The actors enter into the neutral setting as their character whenever they are ready and they then interact with the environment. They must:

After each scene is over you should discuss the scene in terms of when it was real, when it was not genuine, what the class understood about each character (who they were, what just happened and what they wanted) and what the outcome of the scene was. Have the class talk about what they saw and the actors eventually discuss the scene and how it played out. Ask them if they were able to stay in the moment occasionally, a lot, or rarely and what that was like. Finally, talk about what they learned and then go on to the next scene.