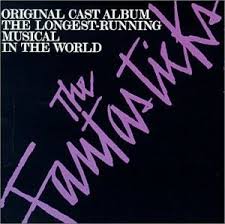 Tom Jones and Harvey Schmidt named Act I of The Fantasticks “In the Moonlight” (due to its romantic mood) and Act II “In the Sun,” which is where the audience witnesses what happens to the two families and the new marriage in the bitter reality of day. Jones intentionally moves away from standard, “pretty poetic” material and delivers the message that we must be “burned” in order to grow.

In Act I, Matt and Luisa find a traditional Broadway musical-style happy ending that exhibits false love. In contrast, Act II is more like the concept musicals of the 1960s and 1970s and Matt and Luisa discover that love cannot be based on superficial romanticism. They realize that marriage can be, in fact, quite difficult.

Both children and adults find that they can relate and connect with the characters’ thoughts and feelings in The Fantasticks because the theme of fantasy versus reality is so timeless. Furthermore, it makes sense that these characters would be playing in a musical because of this mystifying theme. People do not typically burst out in song in the real world, but in the fantasy land of a musical it is acceptable.

The Character of Luisa

The Fantasticks portrays Luisa as a “frilly” and shallow child who is more in love with herself and “being in love” than she actually is with Matt. Students may be going through this phase of their life in the present moment, and many educators may remember that time in their life when they were foolish young lovers themselves. The musical also helps its audience connect because of the book’s emotional connection with music. Whenever Luisa is at the peak of her emotions, she explodes impulsively into song because communicating her feelings solely by words is not enough, and it would not be enough for the audience.

Musicals (if written well) add more power to a script. They amplify emotions. In today’s world, where people tend to be a bit more reserved about their feelings, the intense emotionalism of The Fantasticks offers audiences the opportunity to release. Why? They are encouraged by Luisa’s own emotional expression. Even if one does not see themselves as naïve or impractical, Luisa’s emotional outpouring of song causes the audience to feel and understand, and perhaps remember feeling the way she does.

The Character of Matt

Matt is also portayed as a shallow and impractical child in the beginning of The Fantasticks. Similar to Luisa, students and educators can both relate to him because we were all young at one time. In the beginning of the musical, Matt has just returned home from agricultural college to carry on his father’s passion for gardening, but Matt views himself as downright exceptional and deserving of recognition (like every boy his age) and he becomes defiant. In the 1950s, taking over the family business was becoming less and less customary, and Matt’s behaviors signify this fact. Even today, young adults are easily persuaded by their parents to pursue “realistic” careers.

Despite Matt’s rebellious ways, he remains passionate about the natural world and he conveys this through outpourings of romantic and poetic songs, which come across as rather comical. In his song “Metaphor,” although he means what he says through his rather emotional and “nature-inspired” text, his overly romantic language actually makes him seem even younger. Again, like with Luisa, although only an adolescent, his passion is strong enough that he can only express his words through song. Therefore, he has a connection with the audience and he is understood.

After Matt has returned from The World (reality) defeated, he attempts to save Luisa one more time later in Act II. Matt tries to stop El Gallo from deserting Luisa and breaking her heart, but, although he has learned a great deal about the hardships of the real world, he is still too young to realize that Luisa needs to experience this hurt in order to grow and mature. She needs to experience the truth of reality.

An essential passage for educators to share with students is the one El Gallo uses to explain himself to the audience:

“There is a curious paradox
That no one can explain.
Who understands the secret
Of the reaping of the grain?
Who understands why Spring is born
Out of winter’s laboring pain?
Or why we all must die a bit
Before we grow again.
I do not know the answer.
I merely know it’s true.
I hurt them for that reason
And myself a little bit too.” El Gallo is translated to mean “The Cock,” which is ironic, and here is why: El Gallo uses his exotic traits (stereotypically deemed to be dangerous and romantic) to attract Luisa, and to “fool” the audience into thinking he is a sexually confident man. However, El Gallo is not all that he seems to be. Jones imagines that El Gallo at one time journeyed out into The World looking for adventure, just like Matt, but he never returned home. El Gallo did not learn vital life lessons until it was too late. Now he is helping Matt and Luisa learn what he struggled to understand. As a defense mechanism, he recreates himself as the villain instead of the victim and is desperate to be in control.

El Gallo wants the audience to believe that he would never be as impractical as Luisa and Matt, but it is a façade to hide the fact that he was once a deceived child, too. He claims to be helping Luisa break out of her fantasy world, and see the world as it truly is: dark, violent, and horrifying. He is hurting her, however, by teaching her how to ignore it and run away from it. Even worse, El Gallo places Matt in all of the foreign places he takes her to, so she is ignoring his suffering as well. She is acting selfish, but in her defense, she is naïve and afraid. She is being seduced by a man who is allowing her dreams and visions to come true. Yes, he is showing her what suffering is, but he is allowing her to run away from it into her imagination (which is exactly what she wants). The musical allows the audience to witness her moments of compassion, but she is struggling against the El Gallo’s magical mask of deceit.

At the end of the musical, the audience realizes that, in a way, the El Gallo is their guide. He subtly displays a moment of compassion and regret by admitting that it hurts himself to hurt the young lovers, but he does it in order for them to grow wiser and stronger.

Ahead of Its Time

The Fantasticks delivers the message that although life is complex and full of obstacles, it is possible for people to persevere and find their way. What makes The Fantasticks so timeless is that everyone of all ages and situations can take something away from the musical. Kids may relate to Matt and Luisa; adults may relate to Bellomy and Hucklebee and hopefully, they will remember what it was like to be young. No matter who we are, however, we can all learn something from El Gallo. If we listen to his message, we leave the musical a little more knowledgeable and complete than before.